This is a placeholder for your sticky navigation bar. It should not be visible.


You’ve no doubt seen plenty reviews and heard quite a bit of well deserved praise for Solo Andata’s new LP on Desire Path. And that kind of popularity is just the sort of thing I tend to shy away from at AGB. But you know what? Fuck it. Ritual is too goddamn good to pass up here.

These two dudes have made a seriously creepy fucking record. Granted, when you have an album called Ritual and you make some cover art like that up there, I suppose it’s to be expected. But still. There’s some weird shit going on here. The opening track is all cicadas and nighttime forest field recordings, setting the tone of wandering alone in the middle of nowhere hearing specters & haunted wind. It’s eerie as fuck, the kind of sounds that if I were to hear alone in the woods, regardless if the sun was up, I would immediately call the cops and start walking in the opposite direction.

Strangely enough, despite the ominous nature of Ritual, it’s a very pleasurable listen. Yeah, it’s a bit nightmarish, but in a really beautiful way. Half doom, half chill ambient, with a solid drone core, it’s impossible to go wrong. Solo Andata “effing killed it” with Ritual, most likely in both the literal & metaphorical sense. You seriously want to pick this sweet piece up. Too bad you already missed out on the $600 edition.

I planned ahead with this one. Made a playlist and everything. The only problem I have with that is not being able to fade songs in and out on the spot. Not sure I can get into that… I’m trying to get back in the swing of not sounding like a total loser when I talk on the air. It’s harder than I thought. So, don’t mind all of the stupid shit I ramble on about. Just enjoy this like a massive mixtape. 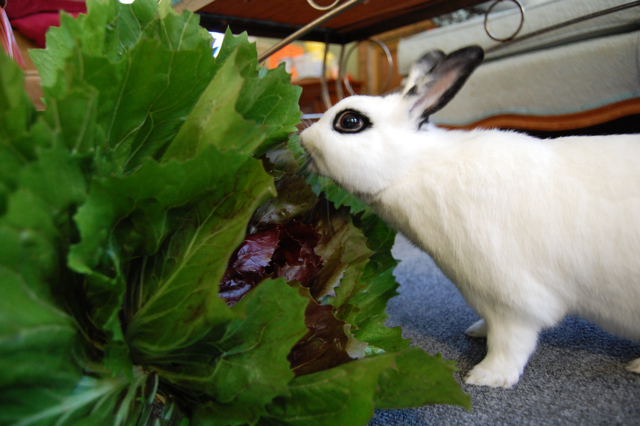 
Let me welcome you to the brand new home of Anti-Gravity Bunny. Gone is the Blogger bullshit. This is mine. I own it. I’m making it as awesome as I want and I’m starting off with a picture of my tiny bunny destroying a massive head of radicchio. There’s some symbolism there but I’m too lazy to figure out what it means.

This new site is infinitely sexier, while being 100% easier to use and a zillion times less cluttered. Let me give you a brief tour.

The “Album Reviews” and stuff on the right are links to those categories, and each category has an icon. I won’t be saying things like “Haiku Review” or “Video” in the post title anymore, it’ll just be indicated by the icon next to the title. The “Venue Info” is a list of Boston area venues, promoters, forums, etc. All the places where you can get the rundown on what’s happening around Boston. The “Artist” and other drop down menus are just another easy way to browse the site if you’re looking for certain topics. A list of my blog pals, as well as where I buy & download order cialis in south africa music, can be found on the “About” page.

I’m not going to have all of the previous posts from Blogger moved over here. I would die before I got them all reformatted to look decent. So I just put the most recent post from each category up so you can have a little something to browse and see what everything will be like. If you ever want to reminisce about an old review or you changed your mind and really want to download that Milieu mp3, you need to go to the old Blogger site.

Then there’s the concert calendar. It’s the one piece that isn’t totally finished. You can use it to find shows and everything, I’m still updating it, it just looks like ass right now and I’m not entirely sure how to change that. So the concert calendar will be a work in progress.

So please, dance around, have some fun, check (and test) shit out. I’m curious as to how everybody likes it (and if everything works ok). Feel free to comment or e-mail letting me know how fucking great it is.