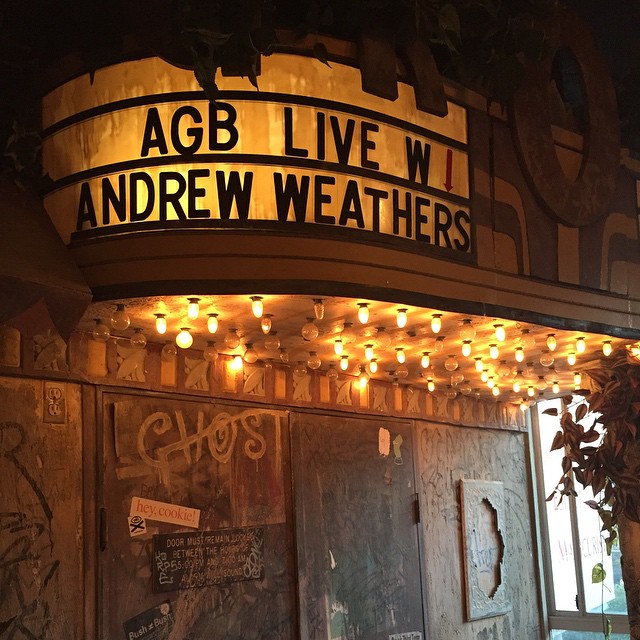 When I went on my road trip in May, I stayed with my friends Forrest & Amanda in San Francisco for a few days and they’re the BFF.fm founders. So when someone had to cancel their regularly scheduled show, and since I had been buying records across the country, I figured I’d do an impromptu live AGB Radio episode. Then I found out Thee Andrew Weathers was available to come down and hang with me in the BFF.fm studio. So that’s how this show happened.

But that was in May, and now it’s September so this is long overdue. Sorry it took so long! I had problems getting ahold of the recording, then I had to get time to edit it and put the playlist together. And I’m also crazy embarrassed about this episode. I did a terrible job doing the live thing on an unfamiliar setup while trying to keep a conversation with Andrew, and the show is mostly just us shooting the shit which is not something I’d ever want to listen to. Maybe you do, though. So here it is. There’s about 30 minutes total of talking and then maybe 90 of music, so I guess that’s not too bad of a ratio.

The show cuts off a bit at the end when I’m reading off the previous setlist and saying my thank yous & goodbyes due to some BFF.fm glitch. You’re not missing much, though.

A thousand thanks to Andrew for joining me. He’s a truly amazing dude and incredibly talented. He co-runs Full Spectrum and records solo stuff as well as band stuff and every bit of it is the best. His newest record is Fuck Everybody, You Can Do Anything. It’s unbelievably awesome. And definitely listen to We’re Not Cautious regardless of whether it’s new to you or not.

A couple notes about the playlist… It’s a bit of a hackjob because I wasn’t really paying attention. I think on more than one occasion I let one song run into another, specifically on Wilderness Trail and Romanian Folk Dances, maybe one or two others. And there’s about 10 seconds of looped skipping on the Popol Vuh song. Oops.